Thanks to the compassion and forethought of a 12 year old boy from Danville named Bobby Redman, the California Highway Patrol will be partnered up with teddy bears! That’s right, you read it correctly. CHP patrol cars will be stocked with teddy bears to be given to small children involved in traffic collisions in an effort to comfort them during such a traumatic experience.

Bobby and his ‘Bobby’s Brigade,’ originally raised funds by conducting local charity events within his East Bay community to purchase the bears over the last six years. This year Bobby’s fundraising efforts went down a little different due to the COVID-19 pandemic and their major annual event had to be canceled but they actually collected more donations than ever.

Bobby’s Brigade still garners support from the local community. Recently Bobby’s Brigade came to our CHP Contra Costa office in Martinez for a special delivery of teddy bears which will be distributed throughout all Bay Area CHP offices.

It should be noted that now that Bobby’s Brigade has secured corporate sponsorship, ongoing help from the community, is a 501(c)(3) nonprofit organization, and Bobby has enough funds to cover all highway patrol first responder vehicles in CHP – Golden Gate Division and many other Highway Patrols for other west coast states.

Thanks to Bobby Redman, his family, and his community supporters, these teddy bears will serve as valuable tools to help comfort kids whose parents are killed or injured, injured themselves, or frightened by the traumatic nature of being involved in a traffic collision. Although it is only a small gesture of compassion to give to a child at the scene of a traumatic collision, it goes a long way in building relationships in our communities. 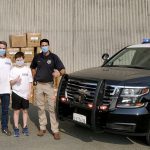 Bobby’s Brigade donates seventy thousand masks to  California Highway Patrol (CHP) to prevent the spread of COVID-19. The masks will be distributed to officers and 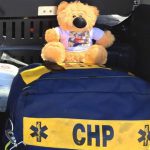 When children are separated from injured parents, the 1st responding officer is required to lock them in the backseat of the CHP vehicle while they